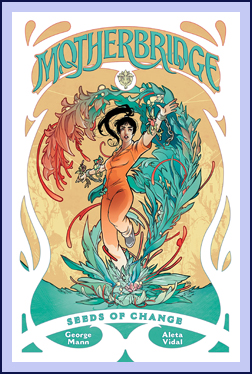 Twenty years ago Mother Nature did what no human could, she united the world. The World Mother awoke and formed a bridge that spanned the globe, making borders irrelevant and migration anywhere a possibility. A "one-world nation, blind to creed or color, to allegiance or belief." Like so many others Hayley Wells used this miracle to create a new life for herself. She left England and settled in New York where she married and had two children. But then utopia failed. The World Mother went silent and the worldbridge began to die and governments used the opportunity to segregate. To bring the walls back. To make it us and them again. Haley was dragged from her bed in the middle of the night. It didn't matter that she was married to an American, she came into the country illegally as the government saw it and she was to be made an example of. With a gun to her head she was walked out beyond the walls and left to fend for herself. She was thrust into a wondrous and ruinous world. Where nature had reclaimed the constructs of man. She is surprised that there is far more life than she ever expected. She's a refugee and there are others. Haley walks into a confrontation. A group is attacking two individuals and it doesn't sit right with Haley. She tries to break up the fight and somehow the worldbridge stirs for her. This is against everything she has heard. Behind the wall they've been told that the worldbridge is dead, and yet somehow it responded to her. She hasn't just been exiled, she's been lied to. This makes her desire to be reunited with her family by bringing down the walls that separate them even stronger. With the help of Constanza and Doyle can they awaken the World Mother? Can Haley help her new friends survive the forces arrayed against them and return the world to the utopia it had become or will she forever be a refugee?

Despite being such a bookworm now I was a reluctant reader in grade school. Therefore I loved comics and graphic novels. Betty and Veronica, The Family Circus, and in particular Classics Illustrated Comics, which was basically CliffsNotes in an illustrated format and made me appear far more widely read than I really was at the time. As I got older and appreciated prose more I never turned my back on my first literary love. Which is why I'm a happy camper when authors whose prose work I love expand to other mediums. George has been working in comics for years and Motherbridge: Seeds of Change is another stellar addition to his copious output. What I really connected to was that I could appreciate it at the age I am now and as that young girl hiding behind the table in the far corner of the library so the librarian, Sister Marie, wouldn't yell at me for sneaking a peak at the comics. What I'm rather inexpertly saying is, that while this comic is written for adults it has such relevant topics that it could be read by young reluctant readers and would give them a book that is very of the moment but that doesn't talk down to you, like L. Frank Baum was notorious for. Because Motherbridge: Seeds of Change is bringing in some heavy topics; immigration, female rights, climate change, forced separation, the military industrial complex, and yet it never feels preachy or politicized, while still being political. It makes you open your eyes. And isn't that what reading is about? People who read are more empathetic and we need empathy now more than ever. It would also be nice if nature actually came along and "tried to balance the system for us," but I have a feeling we're going to have to do the work. But if more people read books like this, if more people connect to each other, what couldn't we do?
Miss Eliza at 12:00 AM